Starting over. The Improbable Lecture

When the financial crisis first hit the real estate elite of the gulf hundreds of luxury limousines were abandoned at Dubai airport. geheimagentur brought one of them to Berlin to give it away to the most improbable proposal for the future of the car. Starting over tells the story of the Improbability Drive and combines it with a passionate analyse of the modern regime of probability, as well as the quest to find escape routes, political and personal ones (like you need them as a single of 40something). It is also an experiment about the stage as a place, that allows us to start over and over again.

The Improbability Drive is a piece by geheimagentur & Joshua Sofaer produced by Foreign Affairs.

Hydrarchy is the concept of a different, fluid order of things, which questions territorial powerrelations. The Club of Marinauts tells stories of people I met and projects I pursued in an ongoing search for what hydrarchy might be today - with cargo and tourism industries governing oceans and harbours. It includes a dialogue between children-wannabe-pirates and real pirates from somalia, an introduction to shipping art, a contemporary lovestory between a sailor and a siren, a call to the citizens of harbour cities to reclaim the sea and, of course, some amazing tattoos.

How to make money. About alternative moneysystems between art and activism as a form of inclusive research into finances  (introducing the first and only children’s bank)

The Art of Measuring. How to reclaim measuring as a practice, that has been taken away from art for too long. Introducing apparatus’ for alternative measurements like for example the interactive laser clock.

Performing Citizenship. About new acts and forms of citizenship in the 21st century and live art as a means to explore them. See also PHD Program.

Want to host a lecture without a lecturer? Check out LIFE LECTURE. 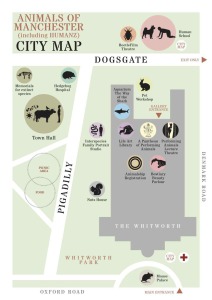